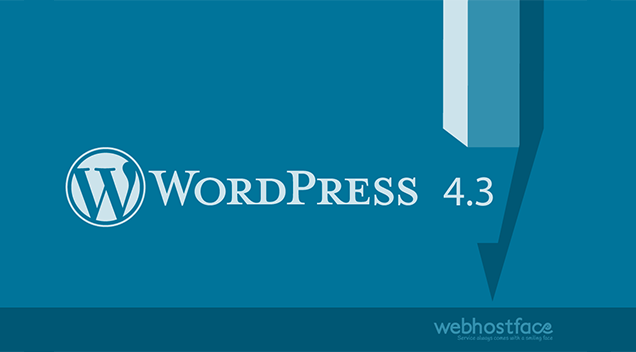 Hi guys! I decided to start this one as there are many keen fans of one application or another. Keeping in touch with the new versions and what they provide is essential for them. However looking behind the curtains before a new update comes to play is something really exciting and gives great insight for the user as to how the development of their favorite application is going or if there are some groundbreaking innovations that are expected to be introduced. That introduction aside, lets take a look at the most popular CMS there is – WordPress, and its new 4.3 version.

WordPress 4.3 is expected to be fully released around mid-August and, apart from the jazz musician whose name it will inherit, all the major new features are already outlined. Looking at them one by one, it seems that WordPress is more and more going for a better user experience for mobile users, better admin interface and improved security, especially for novice users.

Improvements of the Visual Editor

For me, and for many others, the visual editor works perfectly as it is. But that doesn’t stop developers of thinking about more ways to improve it. Now, you can save some clicking from the formatting buttons, as you will be able to use simple markup in the text to replace it and convert that text into HTML. Some examples:

> will work as a Blockquote button

Users who like to type fast and don’t want to lose their inspiration – this will certainly save you some time!

More power to the Customizer

This actually started a few WordPress versions ago and it seems that developers want to move some of the frequently used options directly in the WP Customizer. Changing and editing menus will become as easy as simple drag-n-dropping. This particular change received mixed reactions from users so far, so developers still keep all the menu options in the admin panel too, just to be on the safe side. The end goal seems to be clear – all theme customizations should be made easily available in the Customizer screen and not require you to scramble around with different tweaks.

You know know what a favicon is and you probably want one – the small site image that appears on the browser tab when your website is opened often goes in sync with the brand and complements your whole visual site image. Up until now it wasn’t so hard to add a favicon, but it almost surely involved using a specific plugin or messing around with your theme files. Never more! A menu will finally be added for that and the upload will be just a couple of mouse clicks away

This one is by far my favorite from the things announced. You all know how WordPress has the reputation of being insecure and prone to attacks. You should also know by now, that hardening WordPress is not really that hard if you follow a set of very simple rules. One of those rules concerns passwords, their strength and their safekeeping. Developers are taking a turn for the better with their ideas to eliminate sending passwords by mail and providing more suggestions on better passwords. As “admin/pass” still seems to be a popular combination for login credentials, WordPress will now suggest a strong password by default when making a new installation or requesting a password reset. They will also try and give better indications as to why a certain password gets a certain Strength score and why is it important for that to be as high as possible. Changing those would still be easily possible, but this will at least help protect users who don’t really give much attention to login details, especially for smaller projects.

Hope you all like this preview and, just like me, are anxiously awaiting to give the new WordPress a go. What WP features are still missing for you? Tell us what are you excited to see and hopefully we can all make the community better!

Top 5 Free Online Store Applications to Save your Business during Coronavirus!