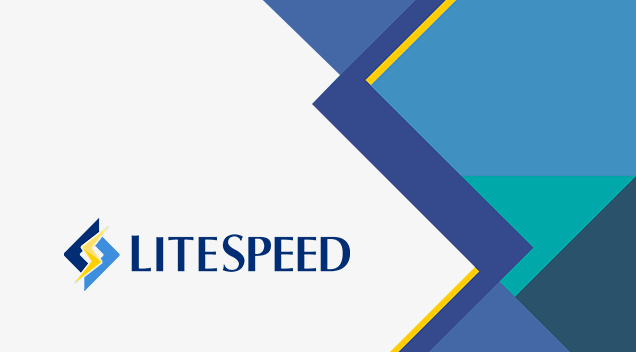 The hosting industry is a constant battlefield of who can deliver the best combination of reliability, performance, and cost-efficiency. This involves being on the constant look-out for new technology to increase the speed and stability of websites hosted on our platforms. Server hardware and facilities are a vital part of this technological one-upmanship, however just as important for the quality of the hosting service is the software on the machines, in particular, the web server.

And after a long and extensive testing period in search of the web server to provide the most lightning-fast, secure, and smooth web performance, our system administrators appointed  LiteSpeed as the absolute winner.

There are many components which set LiteSpeed apart from competitive technologies, but probably the most important one is its efficient event-driven architecture. It allows it to serve all connections on a few processes, which significantly reduces resource consumption. This means that you can serve many more connections much faster and with next to no overhead.

Unlike most web servers, LiteSpeed uses asynchronous input/output processing, which means that it permits processes to begin before an ongoing transmission is finished, thus reducing the waiting period for an execution. That additionally cuts the time for processes to complete, which means your site will execute requests much faster.

On top of that, LiteSpeed significantly improves the efficiency of the server caching layer. Instead of starting a new PHP process each time, the web server uses a  fork() system call, which allows an efficient use of opcode cache.

LiteSpeed impresses in terms of security and stability as well. It brings game-changing DDoS mitigation technology built within the web server, which allows for its better utilization. With its per-IP connection, bandwidth throttling, and mod_security compatibility, LiteSpeed effectively shields the server against Brute Force and XSS attacks, SQL injections and other threats.

What are the benefits for the user?

Thanks to its full compatibility with the technology on the servers, client websites will only stand to benefit from the LiteSpeed integration. The advantages for users on the US shared environment are numerous – from reduced resources consumption to a significant jump in speed. LiteSpeed has the capability of handling a huge amount of clients at the same time with only a fraction of the memory and CPU required with most other web servers. That is also valid for the number of simultaneous visitors on your website, which means that on the LiteSpeed server, you can handle more visitors without any extra cost. It also has the capacity to handle sudden spikes of traffic without the need to upgrade resources.

And who doesn’t want a blazing-fast website? On the LiteSpeed platform, online projects reduce response time and measurably boost in speed. This leads to your visitors being happy with the experience they get each time they visit your website, which will undoubtedly turn a huge chunk of them into clients and increase your profits. With LiteSpeed’s caching solution for most popular website applications, like WordPress and WooCommerce, Joomla!, Magento, PrestaShop, you can additionally accelerate your business.

Currently, LiteSpeed web server is only available on our US shared hosting packages. We plan to implement it on all locations, so stand by for an update! In the meantime, sign up for a new hosting account to take full advantage of all the benefits of this state-of-the-art technology and start the new year with an online project ready to skyrocket!

Project Loon Brings The Developing World to The Digital Era