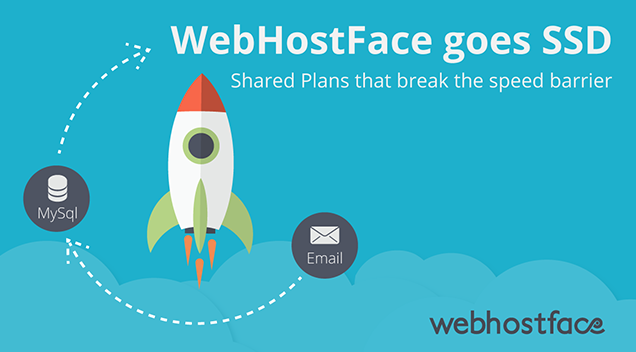 It is time for more irresistible and exciting features coming from the WeHostFace factory! And what can be more favorable for hosting users than speedier performance of their websites and emails…That is right! We officially announce our SSD powered Shared Hosting Plans!

Throughout the past couple of years Solid-State Drives (SSDs) have gained a great popularity among the users all over the world. That has its roots in the fact that SSDs can have 100 times better performance, data access is provided in a flash, file transfers are swifter, and they offer a brisk overall computing experience. The speed of HDDs data access depends on the distance from the read-write heads while SSDs can be accessed at once.

These of course are only perfunctory facts that laid the foundations of our research and tests in our constant pursuit of an ideal hosting environment. And so we started testing the configuration of the servers combining HDDs and SSDs because (as always) we wanted to take the best from both worlds.

How we did it?

We attained our object by crafting a shared environment composed of SATA HDDs in RAID 1 for the files and SSDs in a separate RAID 1 for the MySQL databases and mails. This probably does not come as a big surprise to hosting users because it is a widely known fact that namely database queries and email queues are the biggest load generators on a hosting machine. The results of our initial benchmarks showed that even though our system admins have performed custom optimizations on our HDD servers that significantly increased the I/O performance, sites with bigger databases could still be quickened in order to fulfill our demands.

What are the results after the move and the impact on the sites hosted at WebHostFace?

After a very complex migration process our shared service users are already moved on the new SSD- driven platform. We could not wait to perform new benchmark tests and compare the stats – before and after the move. The aftermath numbers are quite impressive – even we did not expect to see such a big difference in the overall server performance together with the flow of the individual websites. If we speak numbers – the improvement is between 50% to 150% in terms of speed . Some heavy websites show even higher numbers with a dramatic 200% performance increase.

So current and future WebHostFace users , you shall see the difference yourselves . Test the new lightning fast shared SSD servers and share with us your own experience in the comments below.

And in the meantime…you can be sure that more exciting new features are coming round the corner because for us at WebHostFace, new concepts and technology have always been the key motivators in our attempts to build a better hosting world.

Ralitsa is ambitious, stubborn and sociable. Art occupies a huge part of her life - from music, theatre and cinematography to ancient and modern literature. She is keen on analysing people's behavior and that helps her find an unique approach to all the different people she communicates with.

Your 2020 Guide to Web Hosting Australia