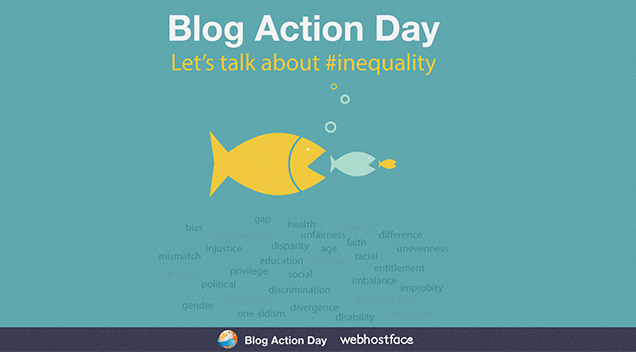 Today, once again, for the 7th year in a roll, all bloggers around the world are invited to participate in Blog Action Day 2014. This year we are talking about #Inequality.

By definition inequality is a difference in any particular factor – be it size, weight, social status, degree etc. Each and every one of us has come across a form of inequality – educational, economical, in gender, social, racial…as much as humans can understand the value of balance, they just cannot seem to achieve it. And that’s not necessarily bad, we are such diverse beings that putting us under one common denominator would simply not work in most cases. Being a web hosting company we would like to share our views on the most frequent occurrences of injustice we observe and why should they be tackled.

Internet is undoubtedly one of the most groundbreaking creations in the past century. Just for a few decades it managed to spread worldwide connecting people of all races, ethnicities and beliefs. Hatred often comes from fear of the unknown and the global net came as a solution for this fear. The ever-growing amount of information gave everyone a chance to learn and understand others better. People see people that they will most probably never meet in their own environment. This is why the Internet censorship is something we will never understand. Communist countries like North Korea, China and Cuba still suffer from heavy restrictions and zero anonymity in their ventures in the online world. Such restrictions often result in seeking alternative ways of fighting for your freedoms which could have been overcome if those freedoms were provided in the first place.

Sadly, politics still play a major role in web hosting, as well as in many tech industries. Users from certain countries are prohibited from many services, thus limiting them to just a few choices for solutions. Most US and US-based providers restrict the countries in embargo with the United States. For example, just because you were born in Iran automatically means that if you want to use US-based services you will have to go through numerous hoops and loops of hiding your identity or using friends/relatives abroad to help. We do not choose our birthplace so we should not be constrained by that factor. Further more, providing the freedom of access to all would erase the need of finding the alternative ways to do so, which in many cases result in fraudulent activities.

I’d like to also call this one “Inequality by assumption”. And this is related to a much bigger and older diversity in the roles of men and women. Through the course of history women have come a really long way and have won some great battles, fighting tooth and nail for them. Even after this immense evolution in the social ranks there are still some professions that are considered more suitable for males. Women that apply for more technical fields, requiring programming knowledge are often overlooked regardless of the qualification. One possible reason might be the male dominance in those fields and how an all-male environment would change with the mere presence of someone from the other gender. While this argument does have certain points, a more probable reason seem to be the “inequality by assumption” as I mentioned. A simple example is how women are considered reckless drivers. This does not imply that all women can’t drive properly, nor that all men are better drivers. This is just a generalization which holds more weigh in the decision-making process of some, compared to others.

Whatever the type of segregation we believe that it hinders progress. It will be silly to think and believe that all people can become equal but the more people get at least the same starting position, the more they can excel. But we can keep fighting, keep seeking our equal rights and be optimistic of what the future holds.