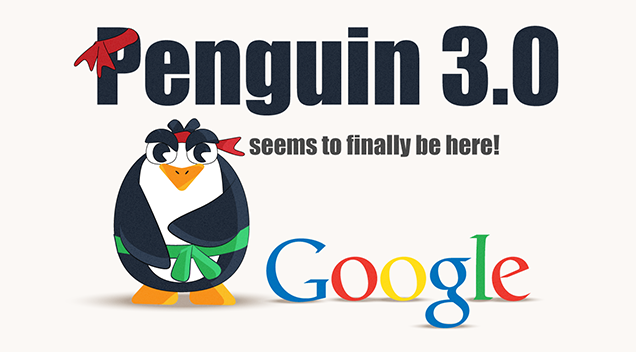 For the last few days the marketing forums are buzzing like an overpopulated bee hive and SEO’s around the world are gossiping about the major changes that seem to be around the corner. Namely, the arrival of the long-awaited update of the Penguin algorithm, version 3.0. As usual the Google High Council is still keeping quiet about it but the fluctuations that have been observed for the last couple of days are too unusual to be considered “normal”. I also double-checked on some websites I’ve been observing and although they did not experience any major changes, the sites around them have shuffled a lot. Too much to be blamed on normal algorithm circumstances…

For starters let’s not get too excited before we get some official confirmation. Even if it HAS arrived , this major algo update is still rolling out. Don’t jump into rushed conclusions based on facts and statistics right now as there is a high chance many changes are still yet to happen. We all know that Google will say nothing before it’s in full effect so for now all you can do is wait and keep an eye on how things are moving.

For those unfamiliar with the Penguin, this is the search engine algorithm that evaluates your links. It’s looking for spammy, toxic and paid links, participation in link networks and all kinds of link building that can be considered “black hat”. So the new update is naturally aimed against that too, lurking in the shadows to slash those bad websites and give priority to the more quality ones, which took the time to do some proper and organic link building. It is still too early to determine what percentage of the search results would be affected but it looks as though it will be more than the last Penguin update. There is also an interesting speculation that the ranking changes occur a little faster on desktop machines, than on mobile devices. Would that mean that the algorithm is tested separately on different devices? It would be interesting to see if the factors it takes into account have different weigh on the different platforms as that would really cause a havoc.

Another thing that caught my attention is the fact that the new Penguin version still doesn’t seem to have fixed the way it treats Negative SEO. So if someone decides to harm your website by throwing a ton of links towards it, they might still confuse the algorithm and your website can still be hit. The overall impression so far is that it is actually pretty spam-tolerant but this can be confirmed after it has been completely rolled out.

Over-optimizing your keywords will hit a hard wall too. Having a lot of links to the commercial pages containing your revenue-driving keywords will trigger the alarm and not only will those particular pages be hit, but most probably – the whole website. This brings us to yet another factor to look for – it is highly anticipated if the penalties will be applied on a page level or on a domain level, something that might considerably change the tactics employed.

The bright side of Penguin 3.0

It’s not all dark clouds tho. This long-awaited appearance of the new Penguin can bring some very good news too. For starters Google have hinted several times that after 3.0 they intend to release updates much more often, maybe even close to a monthly basis (in comparison, the last update came out a little more than a year ago). So all those people who really took their team to clean/rebuild their website won’t be waiting for a reconsideration for over 12 months but will instead better learn what to tweak and what brings positive results. With more frequent updates the followers of good SEO practices will also see more and more low quality websites going down as one update definitely cannot punish them all. The algorithm will learn more and more and those changes can be implemented faster.

What can you do about it?

Actually – not much you CAN do. If you suspect that your website might be hit, it most probably will if the update has indeed started rolling out. Some good news is that, if you made positive link changes or submitted a reconsideration request, even just recently, they will most probably be processed and your website can (re)gain positions accordingly. Apart from that it’s the same all recovery tactics – either delegate some time to carefully go through all your links and remove the “bad” ones, or simply throw everything away and start from scratch. As both of those options are pretty time-consuming and require much work, you better think twice before you gladly accept that “offer for super-cheap links from high PR websites” you saw on Fiverr.

So better keep your eyes open, guys. If you see a Penguin with a cold weapon peeking through your window chances are that it’s not coming to just say “Hello”. Do not be caught off-guard just because of its cuteness, be prepared and be ready. What about you, folks? Noticed any changes in the last few days? Share your experience in the comments below.

Google Hummingbird – The healer of White Hat SEO in Hosting

SiteWit: the SEO Brain for Your Small Business Website