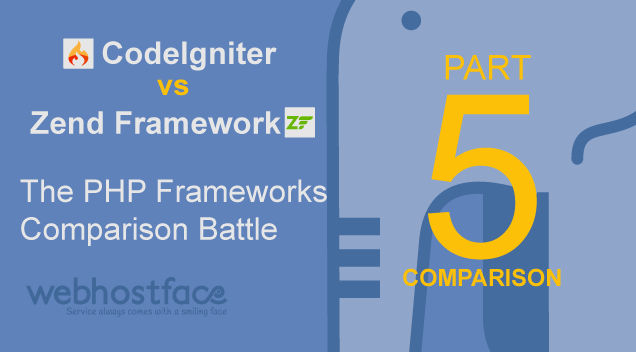 CodeIgniter (CI) and Zend Frameworks (ZF) are one of the first PHP Frameworks and have been around for quite some time now. There are many advantages to using both frameworks and we’ll try to cover the main similarities and differences.

Both are well tested and used by many applications, underwent many changes and use the M-V-C model. Since they’ve been released over 11 years ago it’s very hard to find any bugs in them. CodeIgniter always had a big community that’s still being supportive. It’s very popular in Asia. Zend is trusted and well established, built and maintained by the company that develops the PHP programming language. It targets big projects and it is most popular in Europe and USA.

Back in the days, there wasn’t a big choice if you wanted to use a Framework to develop applications fast and both CodeIgniter and Zend Framework gathered popularity as many old projects were built on them. In recent days they’ve lost that popularity due to other, more rapidly developing frameworks like Laravel and Symfony.

CodeIgniter’s current version is 3.1.6, it was stuck in its 2.X version for some time and the update to 3.X came out in 2015 while ZF’s stable version is 2.4.13 and the 3 dev version is in their official GitHub.

One of the main differences between CodeIgniter and Zend Framework is the amount of code and functionality that they provide developers with and all the indirect problems that this can lead to. CI could be considered slightly outdated and due to this some features from the new PHP versions aren’t included, one such being that it’s not fully PSR-4 compatible (autoloading). Those features can be added manually but this would involve extending the core functionality.

Zend Framework is an enterprise framework used on big projects to help their business grow and it’s not recommended to be used for smaller ones. CI on the other side is a very lightweight framework and its total size is around 3 MBs in total. It’s also one of the best-performing frameworks on shared hosting environments, all that you have to make CodeIgniter work is to download its files or to simply upload your locally developed installation in your domain’s directory and you’re all set.

When it comes down to deployment PHP developers use Composer as their main dependency resolver tool. ZF has a lot of functionality added out of the box and this is one of its main advantages and disadvantages at the same time. Having a lot of options is not always good as this means that there is a lot of bloatware along with it, unnecessary code that’s dragged along the core functionality. In addition to that, there’s also a steep learning curve until you recognize how to configure everything properly and ZF is one of the worst documented frameworks making it a bad choice for beginners. CI’s documentation is very extensive and it’s way much easier to learn. It’s compatibility and ease of use are a great advantage and makes it perfectly suitable for smaller projects that need to be deployed fast. Due to this CI doesn’t include direct support for Composer and you have to manually add it in addition to making the configuration to work with any external libraries as well, another thing to mention is that they do not have a native library for authentication and built-in support for AJAX requests.

CodeIgniter is a nice introduction to working with the M-V-C model and OOP and it’s based around it despite that this isn’t fully native. One thing to mention is the CI singleton that’s used and not many developers are fond of its implementation. Zend Framework also heavily revolves around the M-V-C model but it requires much more knowledge in order to able to work fluently with it.

Want to try coding in CodeIgniter or Zend Framework?

Not a problem at all, we offer completely working CodeIgniter and Zend Framework hosting environment where you can test and develop your projects, at a very affordable price – NOW WITH 80% OFF!

As a conclusion, we can say that Zend Framework targets enterprise projects and supports big businesses by offering them a stable solution to their problems. It’s hard to learn and could be slower than other frameworks. CodeIgniter, on the other hand, is an opposite of that – it’s small, easy to learn and could be used to deploy projects faster.

Both CI and ZF have been around for quite some time and there are many experienced developers familiar with them and the choice between modern frameworks is entirely based on the developers that will be building and maintaining the project.

PHP 7 is coming – everything you need to know